Sacred Delos – a “Must See” in the Greek islands 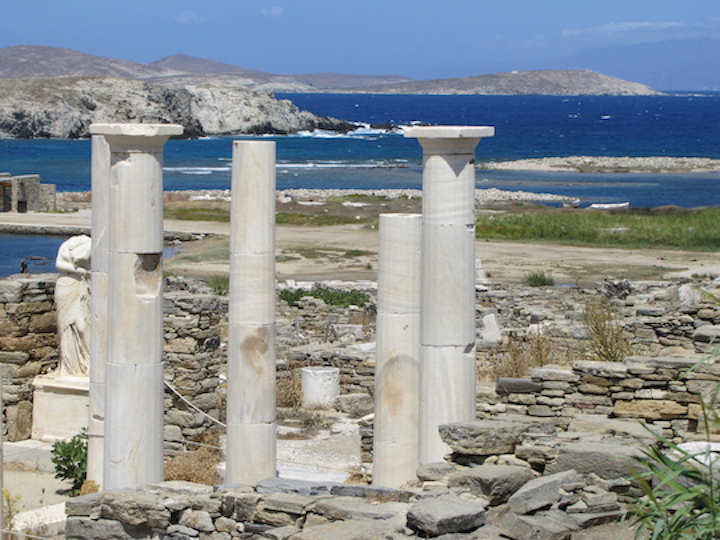 The UNESCO World Heritage Site of Delos, a small island off the coast of Mykonos in the Cyclades island chain, is rich in history and bears witness to civilizations dating from the 3rd millennium B.C. to the 1st century A.D.   The island’s tiny size belies its importance not only as a sacred place of worship of the Olympian gods Apollo and Artemis who were born on Delos, but also as a thriving and cosmopolitan trading settlement in the first and second centuries B.C. when the island reached its apex.

It is thought that by 90 B.C., over 30,000 people lived on Delos due to its position as a free port and the center of all trading in the eastern Mediterranean.   Many cultures and rich merchants, bankers, ship owners, and tradespeople settled and lived harmoniously there. This glory can still be seen today in the many sanctuaries and temples including the 5 Treasuries (for the safekeeping of the offering of cities), the Sanctuary of the Syrian Deities, the Sanctuary of the Egyptian Deities, and wealthy merchant houses with mosaic floors including the House with the Trident and Dionysis House.

The island has much to delight travelers of all ages. The promenade to the Sacred Lake is flanked by the Naxian Lions (the originals have been moved inside the island’s Museum because of concerns about the harsh effects of winds and weather) – always a great spot for a photo opp!   The ruins of the Lake House provide a glimpse into the living conditions on Delos in the 1st and 2nd centuries B.C. – quite advanced really – with latrines, underground cisterns, a kitchen, and living quarters for free man and slaves alike.

As if this is not enough to grab your attention, there are phallic statues dedicated to Apollo and even a phallic sign carved into a brick wall pointing the way to the local brothel (our wonderful tour guide made sure to point this out to my pre-teenage sons some years ago, much to their delight!).

If history and ancient mythology are not your “thing”, you will be rewarded with a climb to the top of Mount Kynthos, the tallest peak on the island, housing the Sanctuary of Zeus and Athena. Although not much remains of the Sanctuary today, the 360° views from the crest of Mount Kynthos are the most spectacular in the Cyclades – you can see Rhenia, Tinos, Naxos, Mykonos, Syros and miles beyond.   It is worth every step up the steep hill just to take in the view!

Delos is open to visitors April through the end of October and can be accessed daily by public boat from Mykonos or by frequent boat excursions from Naxos and Paros.   Or, for those on a luxe budget, embark on a day catamaran or motor yacht charter from Mykonos and enjoy a stop on Delos before swimming in crystal clear waters of nearby Rhenia.

No matter your travel mode, be sure to include a visit to Delos in your Greek Island odyssey!

Nancy Mantzikos is the Founder of Delfinia Group and the company’s Greece destination specialist.  Nancy shares her passion for Greece and the Mediterranean with her clients in each hand-crafted vacation, yacht charter, villa rental, and special event that she arranges.  Nancy calls Mykonos Island her second home and hopes to have the opportunity to show you the Greece that she has come to know and love!